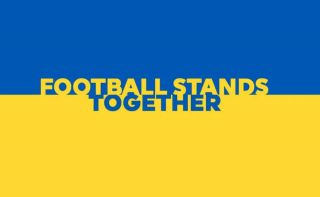 The Premier League announced plans to show solidarity with the Ukrainian people at all matches this weekend.

Manchester United travel to the Etihad to take on rivals Manchester City when captains of all clubs will wear special armbands in Ukraine colours following Russia’s aggressive invasion of the country.

On top of that, fans attending the Manchester derby are encouraged to join players, managers, match officials and club staff in a moment of reflection before kick-off.

The large screens seen at Premier League stadiums throughout the country will display a ‘Football Stands Together’ tribute against a blue and yellow themed backdrop.

A statement from the Premier League read: “The Premier League and our clubs wholeheartedly reject Russia’s actions and will be showing support for the people of Ukraine at all matches this weekend.

“We call for peace and our thoughts are with all those who have been impacted.”

It remains to be seen who will captain United against City on Sunday because Victor Lindelof could start – ahead of Harry Maguire – alongside Raphael Varane. That could see Bruno Fernandes or David de Gea take the armband.

Let us know in the comment section who you think will captain the Reds against City?