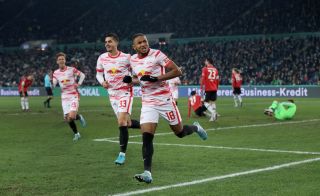 Manchester United are said to be keeping an eye on RB Leipzig attacker Christopher Nkunku.

The versatile attacker has been in great form this season, with Sky Germany (via Sport Witness) reporting that United are showing an interest in the Leipzig man, along with Man City and his former club Paris-Saint Germain.

The German publication claims that the 24-year-old’s current deal doesn’t include a release clause, meaning it could take €55 million (£45.7m) to prize the French star away from Leipzig.

So far this season, Nkunku has 38 goal contributions in 36 games across all competitions (25G, 13A), so it’s a big surprise to see that he is still waiting on his first France cap under manager Didier Deschamps. It’s been his best season since his move from PSG in 2019.

Nkunku has 38 goal contributions in 36 games in all competitions this season (25G, 13A) 👏#UEL pic.twitter.com/VIDXMUv62a

However, Nkunku can play in a range of attacking positions but the final decision should come from whoever United appoint as manager at the end of the season. It may depend on Paul Pogba’s future with Nkunku’s French colleague likely to leave Old Trafford on a free transfer.

Nkunku continued his remarkable form on Wednesday night when he started alongside Andre Silva up front in Leipzig’s DFB-Pokal quarter-final clash against Hannover. He starred in the 4-0 win, scoring twice to book a place in the semi-finals, as they hunt for their first ever German cup victory.

It may make sense to sell Anthony Martial and use that money to get Nkunku as a solid replacement.