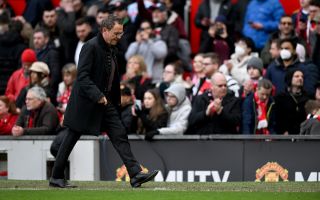 We know that Rangnick likes to control games, with intensity and a high defensive line, but that will prove extremely difficult to pull off against the reigning Premier League champions.

Rangnick is highly regarded in the football world, like Pep Guardiola, but this is still a United team trying to find momentum under the new manager. We can see a change in style of play but there’s not enough consistency in terms of results.

Chadwick thinks Rangnick will be aware that United are unlikely to beat City in terms of possession, so they might revert to a more counter-attacking style, utilising the pace of their wide players. That approach previously worked for Ole Gunnar Solskjaer but the Norwegian was in charge when City beat us 2-0 at Old Trafford earlier this season.

“Man City are going to dominate possession, but United have got great weapons on the counter attack, with great pace and power in the wide areas,” Chadwick told Caught Offside.

“I think it’ll be the case of playing this game a bit like they have under Solskjaer in recent seasons, where they’ve had great success. Don’t get me wrong, it’s going to be an incredibly tough challenge, but we saw Spurs win there, and City had a difficult game at Everton even though they got the result.

“You never know in those derby games, you almost fancy City more at Old Trafford than at the Etihad, based on recent results. It’ll be tough for United but I don’t think you can count them out.

“Rangnick’s a hugely experienced manager, so I think he’ll understand that United are not going to go to City and dominate possession. He’ll surely set up in a similar way to Solskjaer and try to counter attack. I expect he’ll change from his normal style for this game.”

Ronaldo has a place in the side, even if United look to counter-attack, says Chadwick: “I think Ronaldo will start the game. He is having a bit of a tough time in front of goal at the moment, but again, it’s a big game and this is where he comes to the fore. I’d be surprised if Rangnick left him out of one of the biggest games of the season.

“There’s pace from Rashford, Elanga or Sancho out wide, but I expect Ronaldo will start in that number 9 position. He was frustrated at the weekend against Watford but if he keeps getting chances he’ll score goals.

“I think Elanga will start the game, he was one of United’s best players at the weekend. He’s really positive, always gives United options with his pace and he’s probably the most in-form wide-man they’ve got at the moment. I wouldn’t be surprised at all if he started this big game.”