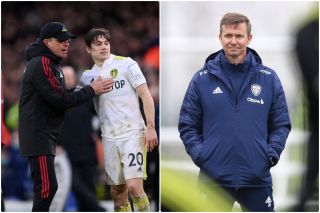 Leeds United recently confirmed the sacking of Marcelo Bielsa and followed it up with the appointment of American coach Jesse Marsch.

The South American leaves Elland Road after guiding the club back to the Premier League two seasons ago, following an 18-year absence, but he was given his marching orders at the weekend as Leeds fell closer to the relegation zone.

Leeds are on a run of six games without a win, but the 4-0 loss at home to Tottenham was the nail in the coffin for Bielsa’s time at the club.

Marsch has arrived without any Premier League experience, but with an extremely tough job to steer Leeds away from the drop zone which they are currently just two points clear of…

Of course, everyone at Stretty News wants them to go down, all while their new manager is happy that they don’t have to play Manchester United for the remainder of the season.

Ahead of his first game as Leeds manager — a trip to Leicester City — Marsch was asked who has influenced him in his career, namedropping Ralf Rangnick after working together within the Red Bull football brand.

“My father’s balance between hard work and enjoying life is the best I have seen. He worked in a tractor factory for 32 years. He was also an incredible hard worker. Built houses,” Marsch said, as per Leeds Live.

“My parents got married very young because of me. They fought for everything in life to achieve and succeed. My work-life balance has always been pretty good.

“Rangnick introduced complex football tactics and ideas to me in a way that ignited my passion for being a top manager.

“I’m thankful we are not playing them [Manchester United] down the stretch. He sent me a note and that was great. A good luck note.”

Hopefully that ‘good luck’ note was a tongue in cheek gesture from Rangnick.