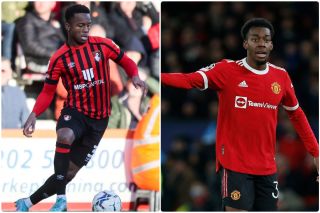 The former Swansea City full-back saw his spell in Wales cut short in order to secure a move to Bournemouth, who are at the right end of the Champions table.

However, Laird has seen his start to life at the Cherries delayed due to injury, so he only made his debut on Saturday against Stoke City.

The 20-year-old recently took part in a Q&A session via Bournemouth’s official Instagram and he was asked to comment on Elanga’s rise in the first team.

The young Swede recently scored after coming off the bench at Elland Road and the Wanda Metropolitano, with a number of fans suggesting he should be starting games ahead of Marcus Rashford, who is struggling for form this season.

Laird was overjoyed to see his teammate doing so well on the biggest stage.

Hopefully Laird can stay fit for the remainder of the season and help Bournemouth push for automatic promotion. It would be even better if he experienced winning the Championship title, which is why I think United sent him Dean Court midway through the season.

I’ll be keeping my fingers crossed so that we see Laird star in the first team next season. His crossing on the right flank would be delightful.