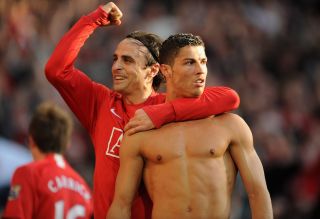 The former Manchester United striker defends his former teammate, who is suffering from a dip in form, though we cannot pretend there’s an alternative in the squad to lead the line.

Edinson Cavani is still unavailable and his fitness this season only backs my firm belief that Ronaldo was a good signing for United, even though it’s clear that, at 37, the GOAT is coming to the end of his career.

Ronaldo may see himself playing for another 4/5 years, but there’s no way he will be at United for that long.

When I say there are no alternatives, Marcus Rashford has rightly lost his place to Anthony Elanga for the foreseeable future, and Anthony Martial didn’t fancy it so pushed for a loan move to Sevilla for the remainder of the season.

But, ultimately, Berbatov is partly right in his comments when he says Ronaldo should not take all the blame.

However, his argument weakens with the suggestion his teammates should be producing more for the Portugal international, when they’ve created plenty of chances for the Portuguese goalscorer in recent weeks.

Speaking to Betfair, as cited by talkSPORT, the Bulgarian who spent four years at Old Trafford, said: “When teams have a bad result the star players always end up with the blame, and at the minute with Manchester Untied, that’s Cristiano Ronaldo.

“At the moment he’s got just one goal in ten games and that seems problematic for everybody, but not for me.

“There are eleven players on the pitch and the blame should be shared. Ronaldo is an icon in the world of football and people need to remember that he’s 37.

“So, from time to time he is allowed to have a couple of bad games. But I don’t think that is the problem here. Overall, as a team when they have a good game they have to follow that up.

“I think Ronaldo is doing enough for United, obviously people will look for more because of the standards that he sets. There will always be people questioning him when he has a bad match, and they are taking advantage of that now. People need to consider his age, how he plays, his position and how the team plays.

“People need to be realistic with him and they need to know that it’s totally different when you’re 37 to being 27. He is going to have moments when he needs his teammates to produce more for him, that’s normal in football.

“Ronaldo is also a realistic guy, he will know that his performances aren’t where he wants them to be, even though he’s older and his game is totally different, he sets very high standards. I don’t think that needs explaining to him.

“Everything that he has achieved in football isn’t because of luck, he knows what he is doing, and he will know that he will need to produce more at the moment and trust me, that will drive him forward. People need to get off his back and let him get on with it.”