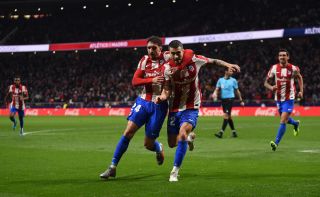 According to Spanish publication Marca, Mario Hermoso is the latest player to be sidelined with an injury, and it sounds like the Spain international will be touch and go for the return leg at Old Trafford, with the sides level at 1-1 after United’s trip to the Wanda Metropolitano.

Although the centre-back started all six of Atletico’s group games, Hermoso was an unused substitute in the first leg, but it’s a blow for Diego Simeone to see his injury list growing ahead of such a big game.

Stefan Savic and Geoffrey Kondogbia, who both started against United, picked up injuries against Celta Vigo on Saturday when Atleti won 2-0. Renan Lodi, who was one of their best players in the first meeting with the Reds, scored a brace to keep their hopes alive in the push for a top four finish.

Atleti find themselves in a similar position to United domestically, as the La Liga champions sit fifth in the table, behind Barcelona in fourth with the same points (45) but worse goal difference.

The Catalan giants also have a game in hand.

With the latest injuries set to cause Diego Simeone a selection headache, the Argentine coach could have just two central defenders available in Jose Gimenez and Felipe when Atelti take on high-flying Real Betis this weekend.

We’re looking forward to the second leg at Old Trafford, but Ralf Rangnick’s men will need to put in a better performance this time around if they’re going to qualify for the Champions League quarter-finals.

Hopefully United’s story in Europe this season doesn’t end in the round-of-16.