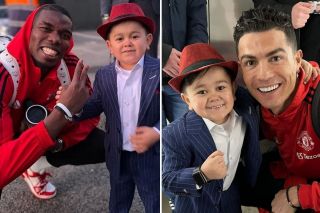 Abdu Rozik’s dream was to meet Cristiano Ronaldo and that became a reality this week when he met the Manchester United squad.

The Tajikistani singer suffered from rickets as a child which led to his growth being affected, whereas his Russian rival Hasbulla, who has a close relationship with retired UFC star Khabib Nurmagomedov, was diagnosed with Growth Hormone Deficiency.

The pair clashed at UFC 267 which made the headlines.

Much like Hasbulla, Rozik’s baby-faced appearance has left many wondering how old he is, but he is in fact 18-years-old.

Rozik took to social media to show off his pictures with the United players.

He made a separate post for his picture with Ronaldo followed by the caption: “Let’s go champ @cristiano dreamt my whole life to meet you bro.”

Rozik was recognised by fans outside Old Trafford on Saturday and received cheers before tipping his hat to the crowd.