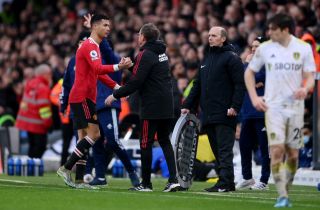 It’s interesting to read what they are saying about Manchester United in Germany, especially when our interim manager Ralf Rangnick is highly thought of as a visionary football man in his homeland.

Rangnick arrived in December to replace Ole Gunnar Solskjaer as interim manager until the end of the season. He is then expected to move upstairs into a consultancy-based role, presumably to offer the club and new manager advice going forward.

Although Rangnick currently manages Manchester United, in Germany he is seen as a club builder, someone better suited to working as a director due to incredible work for the Red Bull football franchise.

However, former Germany international Stefen Effenberg does not sound too surprised by United’s struggles on the pitch in recent years. He has decided to defend his compatriot following a run of underwhelming results by insisting that the job at Old Trafford is no easy task.

Effenberg also thinks that Cristiano Ronaldo is a proving to be a problem for Rangnick — simply because he is past it but deemed untouchable as far as the fans are concerned.

“One thing first: the fact that a global club that is so well positioned financially has not won an important title for years cannot be a coincidence,” Effenberg told Sport Buzzer.

“Despite all the problems and the great competition, the club’s and the fans’ self-image still includes going far in the Champions League and finishing at least in the top four in the league.

“This is not an easy task for Rangnick, who has to deal with many problems.

“(Cristiano Ronaldo) that’s another Rangnick construction site. For United fans, Ronaldo is untouchable for life because he has done incredible things for the club.

“In purely sporting terms, for all the class that still exists, he is past his zenith. A goalkeeper or defender at 37 can perhaps still consistently deliver at that level. As a striker, that is much more difficult nowadays, almost impossible.”

We all know that Ronaldo’s best days are behind him, but it’s not his fault that Edinson Cavani can’t play or Anthony Martial wanted to leave in January. He played 4 games in 11 days recently yet nobody wanted to account for the fact that a young player would struggle with the same demands.