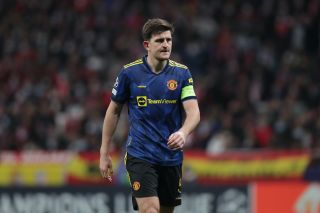 Former Manchester United full-back Paul Parker suggests that the club might need to think about selling Harry Maguire if they can get a reasonable offer for the centre-back.

Parker, who knows a thing or two about playing in defence for the mighty Reds, thinks that Victor Lindelof and Raphael Varane can build something – but that isn’t good news for the skipper.

The England international got his big move to United after impressing at Leicester City, as per BBC Sport, but he has struggled this season at Old Trafford.

However, Maguire did show good form in his first season at the club, when Ole Gunnar Solskjaer set the team up to counter-attack. That suited Maguire because the team played in a deep shape, accepting that high balls would come into the box that he would head them away.

Now the team is being asked to play a high line and that is always going to be a problem for Maguire, with his lack of pace, as pointed out recently by Rio Ferdinand.

Parker thinks it might be worth considering offers for Maguire in the summer.

“If United, in my opinion, were to get somewhere near to their money back on Harry Maguire, I think they’ll have to think about it,” Parker told the Daily Express.

“I think [Victor] Lindelof and [Raphael] Varane, you know, they could build something on there maybe, in a mode of what they’re looking for and where the club wants to be.

“You’re talking about players who are definitely more agile, a little bit quicker, better defenders in one against one situations and I think you have to look at it that way.

“I don’t know if it’s going to happen. Me, personally, for United to go forward, that’s the starting area.

“But again the same old scenario – you don’t want the manager coming in and all of a sudden, he comes in, he wants to do stuff and then he stops, the people above stop him from doing what he wants to do and then United go through the same stories.”

United paid a lot of money to get Maguire and they won’t let him go on the cheap.

I wonder if they could persuade Newcastle United to bid £50m for his signature? Although I think United would take that, it’s approximately worth £30m in losses considering they paid £80m for him in 2019.