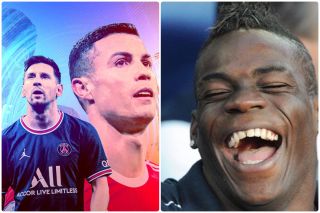 Mario Balotelli has attracted a lot of attention throughout his career. He also brought plenty of criticism his way during his time at Manchester City.

On the day he signed for City, he said he would’ve preferred to continue playing in Italy (via BBC Sport), and then he went on to be involved in a host of controversies, including punch-ups with teammates and throwing darts at youth team players.

However, former United manager Jose Mourinho has always spoken fondly about his time with Balotelli at Inter Milan, but there was no talking to the Italian striker. For all his talent he was a complete liability.

In a recent interview with The Athletic, Balotelli says he’s ‘100% sure’ that his quality was at the same level as Cristiano Ronaldo and Lionel Messi. He also uses a big ‘IF’ in his comments to suggest to only difference between him and the almighty pair was he missed some chances to be at that level.

Balotelli said: “I am 100 per cent sure that my quality is the same level as these people, but I… I missed some chances, you know. It happens.

“Nowadays, I cannot say I’m as good as Ronaldo, because Ronaldo won how many golden balls [Ballon d’Or awards]? Five? You cannot compare yourself to Messi and Ronaldo, nobody can. But if we’re talking about only quality, football quality, I have nothing to be jealous of them, to be honest.”

So, despite saying you cannot compare yourself to Messi and Ronaldo, Balotelli does it anyway.

Can’t help but laugh at these comments.

Ronaldo and Messi and on a completely different planet when it comes to footballing quality.