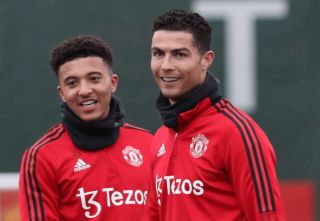 Our players have no midweek games – unlike City, who play tonight – so they will get a full week of training under their belts to prepare for the big game.

From the pictures posted on social media, there’s still no sign of Edinson Cavani who has been missed recent matches due to an injury.

Cristiano Ronaldo and Jadon Sancho can be seen sharing a joke, while Bruno Fernandes, Raphael Varane and Anthony Elanga all look focused on the job at hand.

The match will be shown live on Sky Sports Premier League and Sky Sports Main Event. Coverage will begin on 4pm, but we’ll be sharing news throughout the day. The game itself is also being streamed live via the Sky Go app.