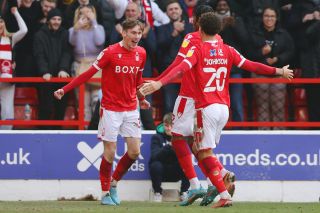 Manchester United loanee James Garner has been named in the Championship team of the month for February.

Garner scored two of his three goals this season last month in wins over Blackburn Rovers and Bristol City.

If the 20-year-old keeps up this level of form, as shown in Nottingham Forest’s FA Cup victories over Arsenal and Leicester City, he will be in contention for a place in the first team next at United next season.

Garner features in a midfield three for the Championship team of the month via Sky Sports:

Players from Blackpool, Coventry, Fulham, Huddersfield, Hull, Middlesbrough, Nottingham Forest and Stoke all feature as @WhoScored run through their Championship Team of the Month for February…🔥📋

Technical director Darren Fletcher this week confirmed that Garner will be granted the opportunity to impress during pre-season ahead of the 2022/23 campaign. That will be his chance to shine under Ralf Rangnick’s successor.

“I’m working closely with Nick Cox, as head of academy, to look at the long-term strategy for bringing players though,” Fletcher said, as quoted by the Manchester Evening News. “We have to manage the balance between allowing them to develop and creating the right steps for that, without piling the pressure onto them.

“Along with Nick, I’m looking at how we best use the loan system to give academy players invaluable experience at other clubs. We currently have 13 young players and academy products on loan and playing regularly in other divisions or leagues.

“Hopefully we’ll see players like Brandon Williams, Teden Mengi, Jimmy Garner, Ethan Laird, Tahith Chong, and Amad Diallo reap the benefits of that. All of them are doing really well on loan and we’re excited to bring them back in pre-season to see how they fare with our first-team players.”

Among the names mentioned by Fletcher, Garner probably stands the best chance at breaking into the United team next season because of how the midfield is likely to require a makeover.

Ethan Laird is another youngster I think will be handed chances.