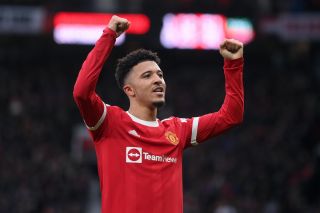 It’s no wonder that Jadon Sancho was nominated for February’s Player of the Month award because the winger has been in sparkling form since the turn of the year.

United We Stand editor Andy Mitten was recently asked how Sancho was turning things around at Old Trafford, after such a slow start on his return to English football, and the respected journalist put it down to confidence.

Mitten also explained that Sancho had a number of knocks and niggles at the start of the season – which the player kept to himself.

The young winger says he is in an incredible position to share the dressing room with renowned stars at the highest level, such as Raphael Varane, Paul Pogba and Cristiano Ronaldo.

By surrounding himself with the best players, the former Borussia Dortmund star is making sure he gets the best advice in an environment where he can grow as a footballer, in a side that is trying to build for success at the very top.

“I’m here with a lot of great players and I’m learning from the best,” Sancho told ManUtd.com.

“You’ve got Cristiano Ronaldo, Paul Pogba, Raphael Varane… all these guys have won major trophies and just being in the changing room with them gives you a blessed feeling.

“I’m definitely learning from them, on and off the pitch, especially in terms of their recovery and how they make themselves better. I’m taking in all the information I can and trying to put it into my game.”

It’s obviously important for players to put themselves through recovery sessions, but Sancho is getting to learn from the very best in Ronaldo, 37, who is still playing at the highest level.

The club’s in-house media asked him how useful rest and recuperation is for Premier League footballers.

“I definitely need my legs to recover as quickly as possible to go again. It’s definitely important and I’m just trying to get a better version of myself.”