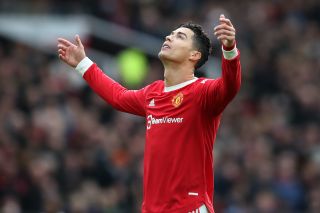 Firstly, I want to make it clear that Gabriel Agbonlahor’s views on Manchester United rarely match ours, but it is clear that Cristiano Ronaldo has started to decline in the latter years of his career.

It happens to every professional footballer before they retire – but Ronaldo is still playing at the highest level. All of a sudden people have forgotten about his goals in the Champions League group stages earlier this season, which secured United’s place in the last-16 — seemingly because there are so many people in a rush to hammer Ronaldo.

It’s always been the case.

Of course, after making the decision to rejoin United in the summer, Ronaldo has remained one of football’s biggest talking points.

Speaking exclusively to Football Insider, Agbonlahor gave his hard-hitting assessment of Ronaldo’s decline: “For a lot of Man United fans, it will be painful watching Ronaldo at the moment.

“You will have memories of Ronaldo now rather than the Ronaldo that was there before.

“He’s 37, he’s outdone most footballers by five or six years but you can’t hide from ageing. Age catches up with everyone and it looks like it has caught up with Ronaldo.

“His legs look tired, he doesn’t look as quick and sharp getting round players. He’s also not a presser from the front either.

“With all those things, it doesn’t make sense for him to keep starting.

“But who else have they got? They’ve not got many other options in there. Unless they play Rashford as a striker or a false nine.

“It’s a big worry for Man United if they have Ronaldo and Cavani as the options up there for next season.

“It’s time for Ronaldo and Messi to go and play and have some fun in MLS. The top leagues seem to be too much for them at the moment.”

Ronaldo, unlike Agbonlahor, won’t be selling his soul to talkSPORT when he retires. I highly doubt we’ll ever hear him speak about a fellow professional in such a way either – suggesting that CR7 and Lionel Messi should go have “some fun” in the MLS.

After Saturday’s scoreless draw with Watford, Ronaldo had played four games in 11 days. That’s not what he was brought to United to do, but with Edinson Cavani deciding he doesn’t fancy it and Anthony Martial asking to leave, we are left with starting a 37-year-old up front every week.

It is unreasonable to expect him to keep up, but Agbonlahor fails to acknowledge this which is poor from someone posing as a pundit of the game.

The youngest, most freshest players would struggle with such demands.