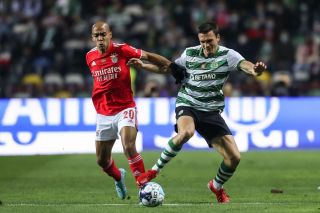 That’s according to a report published last week from The Mirror, along with suggestions that Palhinha could join three of his Portugal team-mates at Old Trafford.

United could certainly do with bolstering in midfield this summer because it is an area that lacks steel. Nemanja Matic was excellent last time out against Watford, but at 33-years-old he can’t be expected to do that every week.

Paulinha, 26, could be a major upgrade on Fred, Matic and Scott McTominay in that defensive midfield role.

Many will argue that United’s failure to sign a defensive midfielder last summer is one of the main reasons Ole Gunnar Solskjaer was sacked in November, so it’s important that a defensive-minded midfielder is priority this summer when the new manager is appointed.

Now Record are linking the Sporting star with Tottenham Hotspur, Newcastle and Atletico Madrid as well as United.

The report adds that United have sent scouts to watch Paulinha on eight occasions this season.

On top of that, Sporting want £20 million plus performance related add-ons for the star, which is hardly expensive for an established international footballer.

At Tottenham and Newcastle, however, Paulinha would be seen as a huge signing and it would raise serious questions over Pierre-Emile Hojbjerg’s future in London.