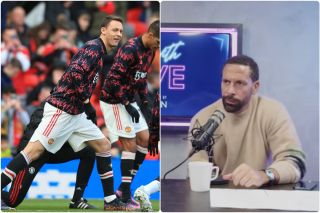 Rio Ferdinand doesn’t think Nemanja Matic will be at Manchester United next season.

The Serb was brilliant when he came off the bench against Atletico Madrid in the Champions League last week, bringing control to United’s midfield after a shoddy first-half display by the team, and he warranted his starting role versus Watford on Saturday.

Unfortunately for United, the game ended in a scoreless draw to hinder our chances of a top four finish in the Premier League, but Matic made a good account of himself again, even if his attacking team-mates couldn’t do the business in front of goal.

Former United defender Rio Ferdinand says he’d be shocking if Matic is still at the club next season, speaking to his YouTube show Vibe with Five: “Very good footballer, simple, understands the role really well, covers spaces, physical enough, big enough to handle the physical demands. I really like him and respect him as a player.

“He’s at the wrong end in terms of age. He’s got until the end of this season and I’d be surprised if he’s in the squad next season just based on his age of what he is and where he is in his career, but he is a great servant to football, great player.”

The fact Matic turns 34 in August means that time is against him as a professional footballer. He plays in midfield, in Europe’s most demanding league, for a club that is expected to win the biggest trophies.

Matic can’t do it every week anymore so it would make sense for United to sign a younger replacement in the summer. He would be a screwed signing for one of the top Serie A clubs and there has been links to Italy in the past (via The Sun).

Declan Rice at West Ham would be a good fit.