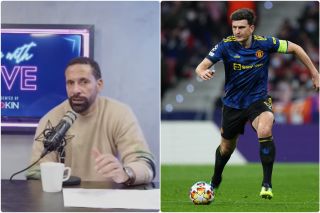 Rio Ferdinand has doubts over Harry Maguire’s future because of the Manchester United captain’s lack of pace.

Maguire has been the subject of criticism this season and United faced Watford with him named on the bench, when Victor Lindelof and Raphael Varane contributed to a clean sheet.

And while Ralf Rangnick has publicly backed Maguire to remain club captain for the rest of the season, Ferdinand fears that the German coach’s style of play is at odds with the centre-back’s profile.

The retired footballer turned pundit was asked whether Lindelof will again be preferred to Maguire on Sunday as United take on rivals Man City in the Premier League.

“I think there can be improvements,” Ferdinand said on his YouTube show, Vibe with Five. “I think Lindelof is a good player, a solid player. Is he gonna enable you to win the league? I don’t know.

“Is Maguire gonna enable you to win the league, that’s the question as well. Because the thing about someone life Ralf and all the top teams now, when they play you, they play on the front foot and are aggressive and wanna win the ball high.

“So, therefore, you need defenders who can defend on the halfway line, one-v-one, two-v-two – or three against two if you need that security.

“If you can play two-v-two one-v-one or on the halfway line, that enables you to have more bodies in the opponent’s half of the pitch, hence why teams do that to win the ball early and be closer to the opposition’s goal to score goals.

“Liverpool do it tremendously well, City do it really, really well as well, Bayern [Munich] do it; three of the best teams on the planet. Everyone’s going that way of playing football, Ralf Rangnick’s style of football is like that.

“Can Maguire do that, can you do that with Maguire? That’s my problem, that’s my issue.”

United didn’t sign Maguire thinking they would be playing with a high line, which is part of the issue here, because he joined a team that would set up to counter-attack under Solskjaer. We shouldn’t dismiss his all round game: ball-playing ability and sound reading of the game.

Furthermore, I don’t think United will be playing a high line against City because they are likely to dominate possession in our half of the pitch.

However, Ferdinand does not believe some of Maguire’s good traits will be enough to keep him at Old Trafford for the distant future.

“His pace doesn’t allow for that [style of play], he’s always gonna be looking over his shoulder,” Ferdinand added.

“If I’m a centre forward, if I’m one of the quick centre-forwards or quick wide players, quick attackers, I would be hanging around where Harry Maguire is.

“For all the good traits that he has in his game, that is a big weakness in his game and that is a fundamental of all of the top teams is to be able to play one-v-one on the halfway line.

“So, I think for Maguire, long-term – unless he can find that extra yard of pace – it’s gonna maybe be difficult for him.”

Maguire has three years left on his contract at United.