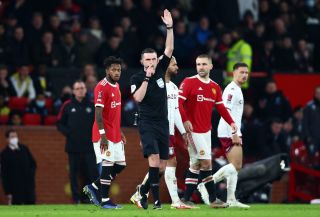 Michael Oliver will referee the Manchester derby on Sunday.

It will be the third time in the Premier League this season that Oliver has officiated a match involving Manchester United (L1 D1), with his latest appointment confirmed by the Premier League’s official website.

This doesn’t bode well for United because we’ve not won a single game in which Oliver has officiated so far this season, though I would prefer to point my finger at our lacklustre performances throughout the campaign rather than an official.

Oliver was also named referee for the Manchester derby earlier this season, which we lost 2-0.

To add to everyone’s concerns about the officials this weekend, Stuart Attwell will be in charge of VAR, after being at the centre of some recent refereeing controversies involving United – in games against Burnley and Middlesbrough.

Attwell was responsible for allowing Matt Crooks’ equaliser for Boro in the FA Cup, after deciding to ignore a blatant handball in the build-up. That decision eventually led to United crashing out of the cup

Whatever happens on Sunday, I don’t want to spending my Sunday evening debating decisions that the referee made… unless they cost City and we take all three points!