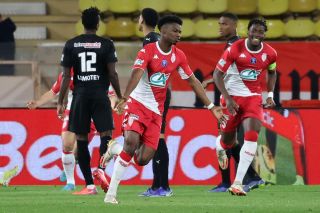 Aurelien Tchouameni will be among Europe’s most wanted players when the transfer window opens this summer.

Manchester United are being linked with a move for the AS Monaco starlet, but if that interest is genuine, they are likely to face stiff competition from the likes of Real Madrid and Liverpool for Tchouameni’s signature.

Last season’s Ligue 1 Young Player of the Year has ‘already spoken’ to United, but he has ‘not made any decision’ on his future yet, according to Spanish publication Sport, as cited by Sport Witness.

The report describes a move from Barcelona as an ‘impossible dream’ as they expect his valuation to be around €60 million (£50m). Moreover, he would prefer a move to Spain over the Premier League, which puts Real Madrid in a strong position if they can find the cash to finance all of their summer targets.

Liverpool are also said to be interested in signing Tchouameni, as per The Mirror.

Tchouameni’s contract at AS Monaco isn’t set to expire until 2024, but the Ligue 1 outfit are known to cash in on young talents, as seen previously with Anthony Martial and Kylian Mbappe.

At 21, the France international does fit within the kind of age profile our recruitment team should be prioritising, which I think will be the case now Ralf Rangnick is part of the club.

United will be linked with several midfielders between now and the summer but few would excite me like Tchouameni.