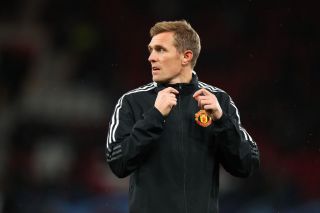 A question I have been unable to answer on social media from several of our readers is, ‘What exactly does Darren Fletcher’s role as technical director entail?’ It’s a pretty fair question because it’s not normal to see a technical directors sat in the dugout on matchday.

The question was raised again at the last fans’ forum in December.

Fletcher has been technical director since March 2021, but he continued to help out with training sessions at Carrington following his appointment. That alone tells you he is valued at the club.

However, the former Manchester United and Scotland midfielder has responded to the questions about his role, being a technical director who frequently sits alongside Ralf Rangnick in the dugout.

“With Ralf and his coaching staff coming in, and Michael and Kieran choosing to move on, we had a quick transition process, so part of my role has been to assist with that, both on the training pitch and during games,” Fletcher told the fans’ forum, as per Manchester Evening News.

“I guess that’s been the most visible party for me this season, but that’s really an addition to my overall technical director role.

“Probably the key part of the role is taking a holistic view of the path for players from out academy to our first-team. That pipeline of academy talent is a massive part of who we are as a club.

“Anthony [Elanga] has done brilliantly since he broke into the first team, and Hannibal Mejbri has also been more involved in the squad. Our U19s recently finished top of their group in the UEFA Youth League, and our U18s have reached the semi-finals of the FA Youth Cup.

“I’m working closely with Nick Cox, as head of academy, to look at the long-term strategy for bringing players through. We have to manage the balance between allowing them to develop and creating the right steps for that, without piling the pressure onto them.

“Along with Nick, I’m looking at how we best use the loan system to give academy players invaluable experience at other clubs. We currently have 13 young players and academy products on loan and playing regularly in other divisions or leagues.

“Hopefully we’ll see players like Brandon Williams, Teden Mengi, Jimmy Garner, Ethan Laird, Tahith Chong, and Amad Diallo reap the benefits of that. All of them are doing really well on loan and we’re excited to bring them back in pre-season to see how they fare with our first-team players.

“It’s been a brilliant experience since I took on the role and the combination of long-term planning and contributing to our strategic goals, with the opportunity to still be close to the team and management, makes it a unique role.”

It’s good to hear that they are looking into the best strategy for loaning young players – to try ensure that when they go out to join clubs on a temporary basis, that they will be cared for and given a chance to develop.

Tahith Chong has recovered from his injury so we’ll be keeping a keen eye on how performs at Birmingham between now and the end of the season. The same goes for Ethan Laird at high-flying Bournemouth.

We could see an influx of academy players in the first team next season.