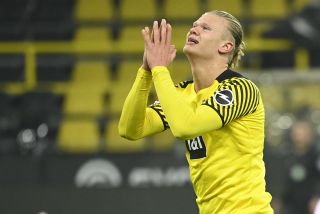 Manchester United should be in the race to sign Erling Haaland this summer.

The Reds need to sign a striker and you won’t find a better goalscorer on the market than Haaland, with a £63m releasee clause that becomes active at the end of the season. This will prompt significant interest from the likes of Real Madrid, Paris Saint-Germain, Man City and Bayern Munich – but Dimitar Berbatov feels that United should be in the mix for the Norway sensation in a bid to address the ongoing struggles on the pitch.

“I saw the video going around social media of Ralf Rangnick laughing off Erling Haaland signing for United,” Berbatov said in an interview with Betfair, as cited by The Irish Independent.

“He told a fan they ‘must be dreaming’ about signing him, maybe that’s a sign that they can’t afford him or it’s not possible for him to move to the club at this moment in time when they aren’t producing good enough football to get his interest, maybe that’s what he meant.

“For me, they need to go back to those high standards of performance that they used to set so that they can attract big players.

“Everybody wants him in summer and maybe Rangnick was being realistic. It’s not a great look, though, and in this day and age, you have to be careful because you can end up in a moment where you need to explain yourself.

“You must be mad to not want a player like Haaland in your team, so maybe Ralf Rangnick should start dreaming.”

Of course, United have been linked with Haaland in the past and tried to sign him before he moved to Borussia Dortmund. The hierarchy should be well aware of what to expect from his agent Mino Raiola before negotiations take place.

In an amusing video clip recently posted on social media, Rangnick told a fan he was “dreaming” when asked about potential transfers for Declan Rice, Jules Kounde and Haaland.

It might be a dream to land all three of those players this summer, but I think Berbatov has forgotten that United are running the risk of missing out on Champions League football next season. That would make it next to impossible to sign Haaland.