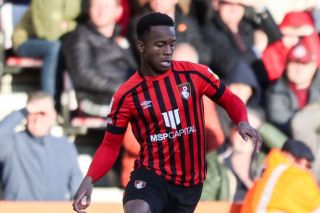 Manchester United loanee Ethan Laird made his Bournemouth debut when he was brought on with just over 15 minutes remaining against Stoke City.

Scott Parker believes the United youngster will prove a major boost for the Cherries, who are pushing for promotion to the Premier League this season, after being left impress by his first display.

“Yeah he did (impress),” said Parker afterwards, as per Dorset.live. “I was pleased for Ethan after he came on because he’s obviously not had a lot of football since he’s been here, so I was pleased for him.”

The 20-year-old spent the first half of the season on loan at Swansea City, but a decision was made in January to take him away from the Welsh club with Bournemouth seen as a better destination for the player’s development.

It may be the case that United felt, by sending Laird to Bournemouth, he would gain valuable experience in a competition team. Even better if he came back to Old Trafford after winning the Championship, eh?

Laird had to wait to make his debut after suffering a setback in his recovery from injury.

The right-back picked up an injury while playing for Swansea on December 11, but he will be looking to end the season strongly now that he is back playing competitive football.