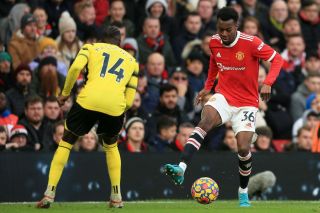 Anthony Elanga is set to make his derby debut against Manchester City in what could be another big week in his career.

That is according to Manchester Evening News reporter Samuel Luckhurst, who explains that Marcus Rashford is set to be benched for the Manchester derby, in an article suggesting Ralf Rangnick has doubts about Cristiano Ronaldo.

The 37-year-old has played a lot of football this season and he is likely to lead our attack again on Sunday, along with proud academy graduate Elanga, but Rashford is set to miss out.

Luckhurst wrote: “Rashford has failed to arrest his poor form and was dropped again for the weekend draw with Watford. The 24-year-old scored 10 club goals in 2021 and could start on the bench in a league derby at the Etihad for only the second time on Sunday.

“Antony Elanga has shone under Rangnick, scoring three times, but is operating from the wing. The 19-year-old is in contention to make his derby debut this weekend.”

We certainly hope that Elanga gets the nod because he has offered something different in attack whenever played. Fans don’t quite know what he’s going to do with the ball and neither do defenders, which can be a massive plus for United.

On top of that, Rashford has having a poor season and he is likely to feature from the bench at point should he not start the game.