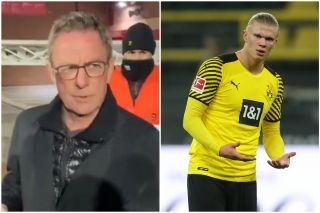 The transfer window brings the worst out in some people. They get dizzy over speculation and wait impatiently for updates from their favourite journalists and ITK accounts on social media.

We all know that Manchester United get linked to every Tom, Dick and Harry and that is unlikely to change any time soon, especially when the squad requires a lot of work to reach the heights United fans expect.

Erling Haaland, Declan Rice and Jules Kounde are three world-class footballers who would strengthen the current United side, but this is not FIFA and signing all three in one window seems like a stretch of the imagination.

However, that did not stop one fan asking Ralf Rangnick about potentially signing those three players this summer, and he played down the links so that fans can adjust their expectations before the transfer window opens this summer.

Rangnick tells the fan he’s “dreaming” in the video below (courtesy of @Jimnik88):

Kounde is a brilliant centre-back who has also played at right-back for Sevilla this season. Other than that, Rice could be the club’s prime target for midfield and I think every big club will be in the hunt for Haaland.

We would be doing well to sign one of these players — all three would improve the team.