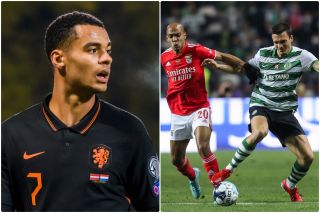 Manchester United are scouting new signings ahead of a busy transfer window, according to reports.

You would hope that following Ralf Rangnick’s appointment as interim manager in December that United will start to use his knowledge of the market and contact book. Earlier this week he was pictured sat alongside AS Monaco sporting director Paul Mitchell at the FA Youth Cup win over Leicester City.

Rangnick was responsible for some big signings down the years when he unearthed talents like Bayern Munich’s Dayot Upamecano, Liverpool’s Sadio Mane and Chelsea’s Timo Werner.

According to The Mirror, United have sent scouts to watch both PSV Eindhoven forward Cody Gakpo and Sporting Lisbon midfielder Joao Palhinha.

The latter could end up as the next Portuguese player to join the squad after Cristiano Ronaldo, Bruno Fernandes and Diogo Dalot.

The German should have a better idea of what United need in the summer, but the big decisions must come from the next manager, with Rangnick moving into a consultant role at the club.

Let us know in the comments section who you think the Reds should sign in the summer.