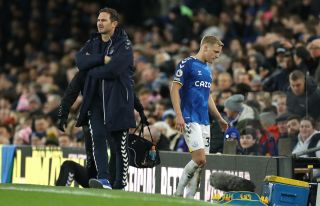 The Toffees lost 1-0 against league leaders Man City on Saturday and Frank Lampard sounded optimistic about Van de Beek’s apparent knock by suggesting cramp was the reason he came off in the second half.

The 24-year-old did not play a lot of football during his time at Manchester United since arriving in September 2020, but it seems like the Netherlands international has been thrown into the deep end of a relegation battle at Goodison Park.

On top of that, he impressed his manager against Pep Guardiola’s side.

Lampard hopes that Van de Beek will be fit and ready to face Tottenham for Everton’s next league match.

They take on Boreham Wood on Thursday for a place in the FA Cup quarter-finals, but the United loanee is cup-tied.

“We hope it is cramp, although I don’t want to commit to that,” Lampard told the official Everton website.

“He said he felt it wasn’t so bad.

“I thought he played really well… put in a really big shift.

“He’s come from not playing many games, to playing regularly for us, so cramp would be understandable.”

Up against City, who like to drain their opponents by keeping possession, Everton’s midfield players had to put in a real shift yesterday and they were unlucky to lose the game given the only goal came from a Michael Keane mistake in the final 10 minutes.

Phil Foden scored the goal to extend City’s lead at the top of the Premier League.