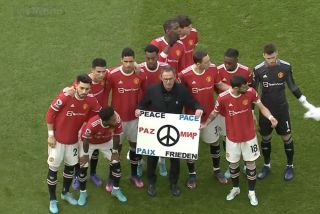 The world has been watching scenes in Ukraine unfold following Russia’s decision to launch a grim invasion on their neighbours on Thursday.

Now on the brink of a humanitarian crisis, football has once again been a leading voice in calls for peace to overcome the ongoing and extremely worrying European conflict.

Moments before the Red Devils’ domestic game against Roy Hodgson’s Hornets kicked off, interim manager Ralf Rangnick, along with the rest of the side’s starting 11, were seen holding a sign that simply read: “Peace”.