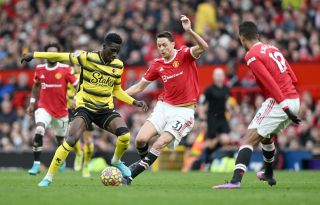 It was a frustrating afternoon at Old Trafford on Saturday when Watford held Manchester United to a scoreless draw.

United created 22 chances (3 on target) but Ben Foster still managed to become the oldest visiting goalkeeper to keep a clean sheet against the Reds, his former club, in the Premier League.

Check out the Stretty News player ratings below where one midfielder scores highly, while some of our star players underperform:

Had nothing to do but his distribution was rubbish again. That is likely to be a concern for the next manager.

Solid enough performance and he spent a large chunk of the match in Watford’s end. Provided a brilliant cross for Ronaldo in the first-half.

The defence was able to push up and the Swede looked comfortable throughout.

Not his best performance but Watford were at nothing in the final third.

Had a chance in the team today but didn’t take it. He will be disappointed with that, but United didn’t threaten enough down the left flank and it was often the case that Telles’ end product was lacking.

The best player on the pitch and it didn’t take long for the Stretford End to sing his name. Brought control to the midfield and sprayed some beautiful passes.

It made sense to take him off for Sancho with under 30 minutes left on the clock, but he kept the ball well and started a number of attacks from deep positions.

A few glimpses of brilliance (link-up play with Elanga in the first half) but nowhere near enough. He squandered a chance at the back post when he sent a volleyed effort wide.

Missed a glorious chance when he went one-on-one with Ben Foster. Like Ronaldo, Fernandes should have won us that game, but he was far too wasteful.

Brought something different to the table and had a number of highlights against Watford. Missed a sitter.

Hit the post and had a goal disallowed for one of his many offsides. Looked his age.