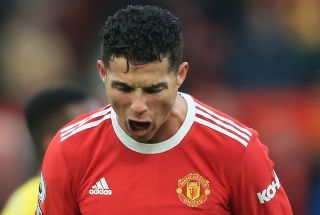 Manchester United duo Cristiano Ronaldo and Bruno Fernandes both missed a number of chances in the scoreless draw against Watford on Saturday.

“If you were going to say to me that they were going to get chances and the likes of Cristiano Ronaldo and Fernandes were going to miss a lot of them, I’d find it hard to believe,” Michael Owen told Premier League Productions, as per The Metro.

“Because they are two of the most clinical people, certainly Ronaldo, he’s had a whole career of being extremely efficient and clinical in front of goal.

“Of course, some of the younger players, if they miss the odd chance you expect it but Ronaldo who virtually puts everything he looks at into the back of the net.

“So it is very strange how they’re missing a lot of chances – a couple today that you would expect of him to have scored, certainly Bruno Fernandes to have scored, but they’re not hitting the back of the net with enough regularity.”

Owen’s comments raise the question… what has happened to Ronaldo?

Ralf Rangnick’s side failed to strengthen their grip on fourth place by dropping two points against another team in the relegation scrap. It only shows how inconsistent we’ve been since the beginning of the season.

United dominated from start to finish and had 22 attempts on goal, but only three of those were on target, meaning it was still a quiet afternoon for Ben Foster.

The former United goalkeeper became the oldest visiting shot stopper to keep a clean sheet against the Reds at Old Trafford in the Premier League, a record previously held by David Seaman.

Ronaldo went close on a number of occasions and hit the post in the first-half. He also had a goal ruled out for offside when he tapped in Alex Telles’ cross.

Moreover, just minutes after Ronaldo hit the post, Fernandes missed a one-on-one opportunity at goal as Foster blocked the attempt.

Things could get worse next weekend against Man City.