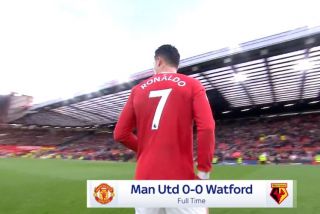 Manchester United dominated Watford for 90 minutes but couldn’t find the back of the net. That pretty much explains why the players looked so bewildered at full-time.

The Reds created plenty of chances but didn’t manage to work Ben Foster enough in the Watford goal.

Our defence played a high line and everyone got forward but they were allowed to do that because the visitors sat back and soaked up the pressure.

We shouldn’t be letting teams like Watford do that, but it has happened a lot this season, with United drawing 8 of their 27 matches played thus far in the Premier League.

Footage from Sky Sports at full-time showed Cristiano Ronaldo, Bruno Fernandes and co look on in disbelief after missing a flurry of chances.

It’s annoying that Ralf Rangnick’s side finally managed to dominate a match for 90 minutes but couldn’t find the back of the net.

Throughout the season we’ve only been able to play well in phases of games, but today we actually dominated from start to finish and have nothing to show for it.

The players need to recoup and pick themselves up because there’s a big derby next weekend. United can’t afford to drop points in many more games if they are to finish in the top four.