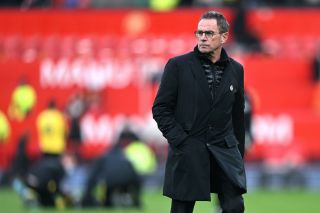 It was a frustrating afternoon as we watched Manchester United draw 0-0 with Watford.

Although the Reds created more than enough chances to win the match, they were incredibly wasteful in front of goal and the opportunities came for nothing.

A stalemate against a side fighting against relegation is bad enough but it makes matters worse that we keep making life harder for ourselves in the race for top four.

A lot of fans reacted to the disappointing result on social media by pointing out how they don’t blame Ralf Rangnick, but the players who are flopping under yet another manager.

I feel for Rangnick tbh, he’s set them up to score and create chances.

You can actually see what he wants to do, these players need upgrading however.

And I'll tell you one thing, won't hear a word against Rangnick. Has made this team so much more creative over the last 6-8 games, it is completely on the players and their inability to finish.

I don't know how anyone can watch Manchester United games and come to the conclusion that Ralf Rangnick is the problem and not the players.

0-0 against Watford? The same side that have 2 clean sheets all season. The team beaten 4-1 at home by Palace in midweek.

Wasteful again in the final third. Not on Rangnick but the players.

Ronaldo’s legs are gone unfortunately as is top 4. #MUFC

Ralf Rangnick coached a win but the players failed to take their chances.

United will need to be much better against Man City next Sunday!