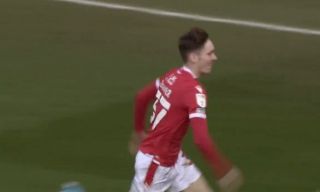 Nottingham Forest look set to push for a place in the play-offs after a 2-0 win over Bristol City. Manchester United loanee James Garner got on the scoresheet to seal the victory.

As things stand, Forest are just three points behind the play-off spots with 13 games remaining.

“We’re still catching up. All we’ve got to do is look after our own house, and that’s by doing what we did today – attacking games, playing well and getting our own points on the board,” Forest manager Steve Cooper said, as per the Nottingham Post.

Brennan Johnson opened the scoring for Forest, but it was Garner who doubled their lead with a powerful strike from the edge of the box.

It’s great to see James ‘Jimmy’ Garner doing well on loan and we’ve covered a lot of his story at Forest.

The midfielder is tipped for big things after impressing in wins over Arsenal and Leicester City in the FA Cup, which Forest still have a small chance of winning.

We wish Garner all the best for the remainder of the season.