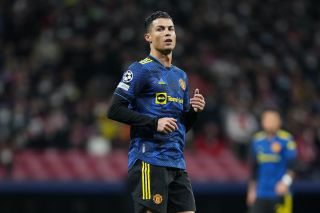 Cristiano Ronaldo has no plans to retire from professional football.

The Manchester United star, 37, insists he still has four or five more years left in him.

The Reds have no chance of winning the Premier League this season and find themselves in a fight for fourth place, which Ronaldo and his teammates won’t see as a success.

On top of that, United crashed out of the FA Cup and League Cup during the early rounds, and it is incredibly unlikely that we’ll go all the way in Europe.

That means Ronaldo’s fairy-tale return to Old Trafford has not gone to plan, although I would argue that United were heading for a group stage exit in the Champions League if it wasn’t for the Portuguese star.

Speaking to DAZN, Ronaldo is quoted by Fabrizio Romano: “It’s hard to say that I don’t want more, because if I’m at a club that gives me the opportunity to win more things, why not?

“I know I don’t have many years left playing, four or five more, we’ll see, and I want to win more things.”

Cristiano Ronaldo tells Dazn: “It’s hard to say that I don’t want more, because if I’m at a club that gives me the opportunity to win more things, why not?”. 🔴 #MUFC

“I know I don’t have many years left playing, four or five more, we’ll see, and I want to win more things”. pic.twitter.com/5AeHjJMNuK

ESPN pundit and former Chelsea player Frank Leboeuf recently called for Ronaldo to retire, rather than tarnishing his reputation as one of the greatest players of all-time, as per the Mail Online.

“Do you know what? I think there is a time where you have to think, ‘what do I do with my life and my career.’

“And maybe it’s time for Cristiano Ronaldo at the end of his career to wonder and have a discussion with himself, and maybe some of his family, to know what he has to do for the rest of his career, if there is a future in his career.

“I don’t want to watch Ronaldo and have pity, because he’s been on the top for so many years.

“I don’t want him to be a normal player. He’s been an exceptional player for so long,” Leboeuf continued.

“I’d prefer him to give up his career at the top instead of maybe trying and play for two or three more years and not being the player that he used to be.”

I don’t know who Leboeuf thinks he is, trying to offer Ronaldo career advice, but the Portuguese star can make his own decisions. He has another year left on his contract at United when this season comes to an end.

Ronaldo is postponing any calls for retirement.