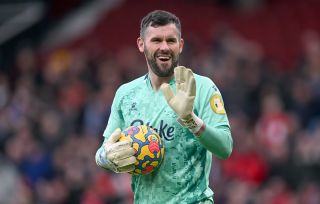 Ben Foster is officially the oldest visiting goalkeeper to keep a clean sheet against Manchester United at Old Trafford in the Premier League.

The former United keeper returned to Old Trafford today with Watford and the Hornets held out for a scoreless draw in their bid to avoid relegation.

United, on the other hand, loosened their grip on fourth place.

According to OptaJoe, Ben Foster (38y 329d) has beaten David Seaman’s record for being the oldest goalkeeper to keep a clean sheet against United in the Premier League. The former Arsenal shot stopper was 38-years and 231-days old at the time, back in May 2002.

38 – Ben Foster (38y 329d) becomes the oldest visiting goalkeeper to keep a clean sheet against Manchester United at Old Trafford in the Premier League. Indeed, the previous oldest visiting keeper to achieve this feat was David Seaman (38y 231d) for Arsenal in May 2002. Shutout. pic.twitter.com/fm5wGzfVZP

United had 22 shots but failed to score against Watford in what was an incredibly frustrating game. We dominated from start to finish but have absolutely nothing to show for it.

Foster will be delighted to get one over his former club, but Watford could easily find themselves in the Championship next season.

They were very poor today.