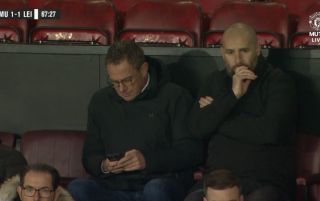 Mitchell, who has close connections not only to Ralf Rangnick but Mauricio Pochettino, was pictured sat alongside United’s current interim boss during the match at Old Trafford.

Pochettino is one of the favourites to become United manager in the summer and he worked with Mitchell at both Southampton and Tottenham. On top that, he worked closely with Rangnick at RB Leipzig.

The club moved quickly to downplay Mitchell’s presence, amid speculation across social media that he could be a future addition.

However, United told the Manchester Evening News that he was in Manchester ‘seeing family’.

It was a good night for the youngsters as United advanced to the FA Youth Cup semi-finals.

Former United academy player Chris Popov opened the scoring with a cool finish for Leicester City, but two goals by Alekandro Garnacho swung the tie in our favour.

Hopefully Mitchell liked what he saw and decides to stick around for a while. He would be a huge benefit to the club when it comes to dealing in the transfer market.