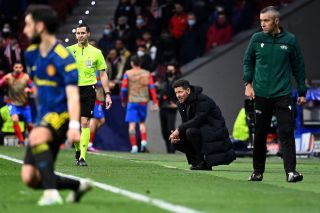 In perhaps the least surprising news of the day, Roy Keane has pinpointed Diego Simeone as the ideal appointment for Manchester United as the club search for a new manager.

You can almost picture them both, on the sideline, ripping shreds out of United players.

Interim boss Ralf Rangnick has not had it easy since taking charge of the first-team in December, with constant talk of upheaval in the dressing room, but it was be unfair to acknowledge how he has got us back on track this season.

United have only lost once under Rangnick so far.

Obviously, United are still drawing far too many games but that is something Rangnick can work on for the remainder of the season.

But no matter what results we get this season, Rangnick is not expected to be made permanent manager.

Keane has urged his former club to ‘get the right manager’ when Rangnick’s stint comes to an end.

“Never mind making excuses saying he’s not available for two years. You pay fortunes for players, so why not a manager?

“I don’t care who’s under contract; if you think he’s the right manager for Manchester United, well you go and get him.

“You go and pay the money whoever it might be. They’ve got to go and get the right manager.”

Keane went on to suggest Simeone might be the right man following United’s 1-1 draw away at Atletico Madrid in the Champions League.

“Maybe Simeone, he’s the right kind of character,” he added.

“He’s having a difficult spell with Atletico. His race has maybe run with them.

“Simeone, go and get him, he’s a big character. He’s done great things. He’s a great character, a big personality. He doesn’t mess around with players. Maybe someone like him coming into the club could work.

“It can soon change. I don’t think it’s all doom and gloom, there’s still good things going on at United, but they’ve got to get the manager. If the manager is not right, then the rest will just fall apart.”