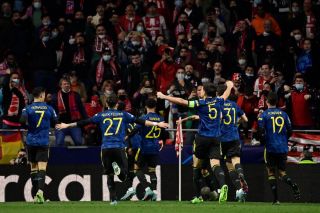 Manchester United interim manager Ralf Rangnick has called on his star players to follow the lead of teenager Anthony Elanga.

As one of the first players to impress Rangnick in training, Elanga has been given more game time under the German and it would be fair to say he has found his feet at the highest level.

The 19-year-old scored in consecutive matches last week, against Leeds United and Atletico Madrid, but the equaliser on Wednesday night keeps us in the Champions League last-16 tie.

Speaking to BT Sport after the 1-1 draw at the Wanda Metropolitano, Rangnick made it clear that he is impressed by the fearless attitude of the young Swede.

“He is playing as though it is a dream come true, it is a joy and fun to watch him play, I wish a few other players would take him as an example and as a role model,” said Rangnick, as quoted by The Athletic (£).

“Anthony, in all the games that he has played so far, just shows that he’s playing with all the passion, all the fun and all the joy.

“He’s just enjoying himself on the pitch and he’s fully aware of his strengths, his assets, his weapons. He’s always trying to play and show those weapons. This is what he did again today.

“Not only the goal he scored, he had two or three great runs and whenever he did that you could all of a sudden see that Atletico had problems with this kind of approach. But we have to show that on other positions as well, so not only with Anthony Elanga or one or two other players.

“We just have to play like that on every single position and if we want to proceed to the quarter-finals in a couple of weeks at Old Trafford we have to play exactly like that.”

It’s interesting to hear Rangnick speak about a 19-year-old as a potential role model for some of the biggest names in football. We’ve got the likes of Cristiano Ronaldo, Raphael Varane and Bruno Fernandes in the dressing room but he is telling the squad to look up to Elanga.

I found it bizarre to find Michael Owen pretty much dismiss Elanga’s performances to date, saying that he won’t ever compare to Ryan Giggs or Wayne Rooney. That doesn’t mean he can’t become a star at United…