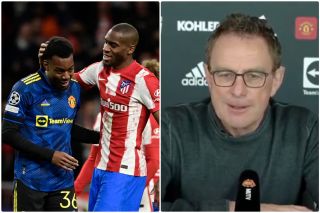 Since breaking into the first-team, United fans have serenaded the academy graduate to the tune of Snap!’s 1993 hit Rhythm Is a Dancer, with the following lyrics:

Rhythem is a dancer, Anthony Elanga,
You won’t stop him if you dare,
Came from Scandinavia,
To be United’s saviour,
Scoring goals from everywhere.

After getting on the scoresheet at Elland Road last weekend, Elanga told United’s official website: “I felt amazing when I scored and hearing them chanting my song. That made it very special.”

But now Rangnick has shared his own opinion on the chant after being asked a question by Andy Mitten, who was first to give the Elanga song airtime on the Talk of The Devils podcast earlier this season.

Rangnick said (via Manchester Evening News): “Yes I know [Elanga’s chant], everyone could hear that song, rhythm is a dancer, yes, I know that song. It’s nice for the boy and it shows how creative our supporters are.”

🗣 "Everybody could hear them singing that song, Rhythm is a dancer. It shows how creative our supporters are."

Ralf Rangnick is a big fan of the Man United chant for Anthony Elanga pic.twitter.com/qVWdP3MfZz

It’s the best chant I have heard in years and I hope Elanga reaches his potential just so that we can sing it for many years to come.

The Wanda Metropoliano was bouncing to the sound of Rhythm Is a Dancer on Wednesday night, just like Elland Road was three days prior.