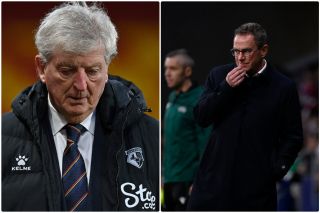 Watford come to Old Trafford on Saturday as Manchester United hope to strengthen their position in the race for fourth place.

The Reds arrived back in Manchester on Thursday morning following their midweek trip to Madrid, which ended in a 1-1 draw at the Wanda Metropolitano. An 80th-minute strike from Anthony Elanga ensured that the tie remains level going into the second leg at Old Trafford.

Interim manager Ralf Rangnick will now shift his focus to the Premier League as United need another three points to keep a hold on fourth place. Arsenal are just one point behind us in fifth, but have two games in hand as the race for Champions League football looks set to go right down to the wire.

“It’s a very important game, but this is the case with almost every fixture,” Rangnick told reporters at his press conference, as per the Manchester Evening News. “We have to keep the momentum against Watford, and then be ready for the upcoming games afterwards. We are fully aware we have to win the game tomorrow.”

Watford are currently sat 19th in the table and look like one of the weaker teams at the bottom of the table. We should be looking to make matters a whole lot worse for them by damaging their goal difference, but we can’t forget how this United side has struggled against weaker opposition this season.

Rangnick was asked about Roy Hodgson’s impact at Watford.

He said: “We’ve met quite a few times [Roy Hodgson], we haven’t played against each other as far as I remember with teams. But we know each other and I’m looking forward to shaking hands with him before and after the game. In his first two and a half games he played in a 4-4-2, like he used to play with his former clubs. They changed in the third game at half-time and since then they’ve played in a 4-3-3 like they did under Ranieri. The style is similar I would say, they have three fast, physical strikers, always looking for the transitional moments, playing pretty direct, so this is their biggest threat.”

Not long ago we drew with Burnley, who are two points clear of Watford in 18th, so we can’t see any fixture as a guaranteed three points.

A win over Watford this weekend would put the icing on the cake after getting a decent result away to Atletico Madrid.