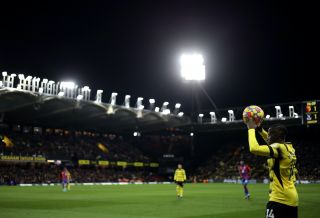 Manchester United will be looking to keep their top four hopes alive when they take on Watford in the Premier League at Old Trafford on Saturday.

The Reds go into the game on the back of a 1-1 draw with Atletico Madrid in the Champions League whilst the visitors were defeated 4-1 by Crystal Palace in the Premier League.

Anthony Elanga could be handed a start after scoring the equaliser against Atletico Madrid.

With the battle for top four looking likely to go down to the wire, United simply cannot afford to drop any points should they wish to finish in the Champions League places at the end of the season.

Watford have endured a miserable season this far and currently find themselves loitering in the relegation zone. Despite a change of management, The Hornets look no better than they did previously under Claudio Ranieri and this is a game United should undoubtedly expect to win but it wont be easy.

Games against the lower sides this season have proved to be tough cookies for United to crack. An early goal in these types of games can go a long way and if the Reds can grab it, then it would force Watford out from the back potentially leaving holes at the back for Ronaldo, Fernandes and co to take full advantage of.

It won’t be easy and I suspect Watford will make life difficult for United, but it’s still a game I expect United to win.