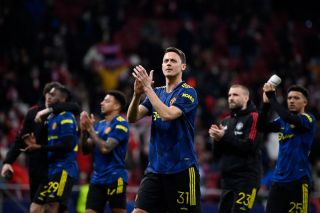 Manchester United return to domestic action this weekend against Watford in the Premier League.

The Reds will be looking to keep a firm hold on fourth place when another relegation contender comes to Old Trafford. Arsenal’s 2-1 win over Wolves on Thursday night means there is little room for error as the Reds have some tough fixtures coming up.

Of course, we already know not to underestimate the Hornets after they managed a 4-1 win at Vicarage Road in November, a result which saw Ole Gunnar Solskjaer sacked.

Ralf Rangnick is expected to make a number of changes to his team that came away from the Wanda Metropolitano with a 1-1 draw on Wednesday night. The squad did not arrive back to Manchester until Thursday morning.

David de Gea will keep his place in goal.

Victor Lindelof started at right-back during the week, but Rangnick will opt for a player more suited to that role for this game. It wouldn’t surprise us if Aaron Wan-Bissaka got a rare start under the German.

Meanwhile, Alex Telles has a good chance of starting at left-back after his solid cameo off the bench on Wednesday night.

In midfield, the boss is likely to give Nemanja Matic the nod instead of Fred and Scott McTominay. The Serb will partner Paul Pogba and Bruno Fernandes in a trio.

Up front, Anthony Elanga deserves a start ahead of Marcus Rashford. The young Swede has scored in two consecutive games off the bench, whereas Rashford has been abysmal. Cristiano Ronaldo will lead the line, with Jadon Sancho cutting in from the wing.

Send us your match predictions in the comment section below.