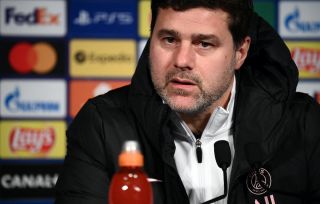 Reports in Spain suggest Mauricio Pochettino would snub an offer from Manchester United in favour of joining Real Madrid in the summer.

The Paris Saint-Germain coach has been heavily linked with the United job but there’s a strong feeling in Spain that he will be persuaded to join Real Madrid instead.

It is understood that United would ‘love’ to hire the Argentine, as per The Athletic, because he is seen as a good fit for the club.

Pochettino is interested in bringing through youngsters and he brought an attractive brand of football to not only Tottenham Hotspur but Southampton. Moreover, he’s already proved that he can help players improve in the Premier League.

According to Sport, Pochettino has already snubbed United and is waiting on a call from Real Madrid if they decide to part ways with Carlo Ancelotti.

Florentino Perez is believed to have made his mind up about Madrid’s next manager after watching them lose 1-0 against PSG in the Champions League last-16 first leg.

Now it sounds like United have competition on their hands. They could also decide to intensify their interest in Ajax coach Erik ten Hag, who is a very popular choice among fans.

Let us know in the comment section if you think United should appoint Pochettino or Ten Hag?