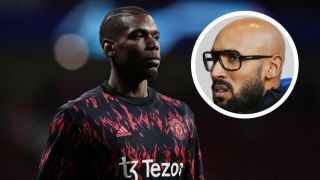 Paul Pogba “would not be against” signing for Paris Saint-Germain in the summer, according to Nicolas Anelka.

Manchester United could lose the French midfielder on a Bosman in 5 months when his contract expires. That has led to him being linked to not just PSG, but Juventus and Real Madrid, yet The Telegraph states that Pogba has not made a decision on his future.

In an interview with RMC Sport, Anelka raised more doubts about Pogba at United and the former Premier League striker thinks a move to PSG would be good for him.

The former France international said: “I know Paul, I played with him at Juventus, and it’s amazing what he can do with the ball.

“It’s been very difficult for him since he came back. He’s been criticised a lot. It’s not the best club where he can have fun and show his talent.

“I think PSG would be great for him. Some say it wouldn’t be good for Paris, because he’s supposedly often injured. But I think his injuries are due to his life in Manchester, because he’s not psychologically well.”

The former Liverpool and Chelsea forward also revealed that Pogba is open to a transfer to PSG, adding: “I discussed this six months ago with him and he would not be against coming to PSG. If he comes, we will forget all the injuries and we will see that he is a top player.”

I think most United fans have accepted that Pogba won’t be at the club next season.

If he wanted to stay at Old Trafford, I’m sure the contract sitting on the table would be signed by now, but United will instead be that club losing a £90m asset for zilch this summer.

Pogba and his agent, Mino Raiola, will get what they want whether it’s at Old Trafford or elsewhere.