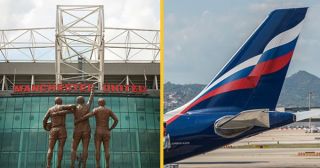 Manchester United have announced that they’ve terminated their sponsorship deal with Russian airline company Aeroflot, in light of Russia’s invasion of Ukraine.

Aeroflot has been associated with United since 2013, when it became the club’s official carrier, and the latest deal was due to run until 2023.

However, United did not use Aeroflot for their midweek trip to Madrid, and on Thursday it was confirmed that Prime Minister Boris Johnson had banned the company from operating in the United Kingdom as a direct response to the conflict in Ukraine.

United’s statement read: “In light of events in Ukraine, we have withdrawn Aeroflot’s sponsorship rights.

“We share the concerns of our fans around the world and extend our sympathies to those affected.”

What is happening in Ukraine can only be described as a human disaster. It’s a terrible situation and we can only hope that politicians worldwide can deescalate the conflict.

Meanwhile, football could continue to make a stand as the English Football League discuss the idea of a grand gesture towards to the people of Ukraine ahead of Sunday’s Carabao Cup final between Chelsea and Liverpool, as per The Independent (£).

The Wembley arch could be lit up in yellow and blue.