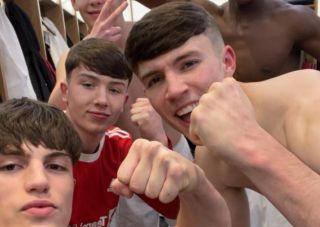 Manchester United U18’s will be dreaming of going all the way in the FA Youth Cup this season after beating Leicester City in the quarter-finals.

The club has not been successful in the competition since 2011, when Jesse Lingard and Paul Pogba were coming through the academy, but there is a number of talented players in the current U18s side that will be aiming to win the FA Youth Cup outright this season.

Travis Binnion’s side have now defeated Scunthorpe, Reading, Everton and Leicester City in the competition so far this season and they can now look forward to the semi-finals.

Star of the night, Alejandro Garnacho, scored two goals after United went 1-0 down.

It was enough to book our place in the next round and you can see from the pictures below that everyone was delighted with the result.

A good run in the FA Youth Cup can help the players’ development as it is often the case that one mistake could see you crash out, especially in cup competitions.

It’s valuable experience for the kids and we’ll be rooting for them to go all the way this season.