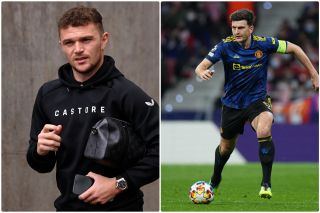 Newcastle United full-back Kieran Trippier has made it clear that he rates Harry Maguire.

The Manchester United skipper has come under serious criticism this season after a number of poor performances. There were questions about whether the captain’s armband would be given to another player, though Ralf Rangnick was quick to shut down those claims.

Maguire led the side at the Wanda Metropolitano on Wednesday night when United came away with a 1-1 draw. Portuguese star Joao Felix got in front of Maguire to head home the opener for Atleti, but the La Liga giants were unable to contain Anthony Elanga in the last 10 minutes. The young Swede became the youngest United player to score in the knockout phase of the competition.

However, after leaving Atletico in January, Trippier would join Newcastle despite being heavily linked with a switch to Old Trafford last year. The England international covered the first-leg clash for BBC 5 Live as it saw the mighty Reds come up against his former club.

Trippier spoke highly of Maguire, saying (via Manchester Evening News): “Harry is a fantastic captain and a brilliant mate of mine.

“He’s a fantastic player and he’s shown that over a number of years for club and country.

“I’ve got huge respect for H. His leadership [impresses me] and the way he is around the place and his teammates. Obviously there I’m talking from England.

“He’s one of those people where, if you’re going through a moment, you can always speak to him – and the way he is on the pitch. He’s a top-quality player and I’m delighted for him and the career that he’s had.

“Harry is Manchester United captain and, over the years, has been a fantastic player for England.”

Maguire will get less criticism once the results improve but at least he’s got Rangnick’s backing.

One point from Trippier’s comments that doesn’t add up is, “I’m delighted for him and the career that he’s had,” though what has Maguire got to show for it? He want trophies and so do we.

It is crucial that the manager supports a player even when they are going through a difficult period.

Maguire is having a bad season but he could bounce back stronger again next season, yet a large portion of the fanbase wouldn’t lose sleep if United sold him in the summer. I think that tells you everything you need to know.