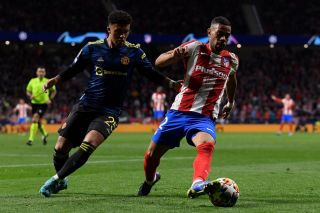 Jadon Sancho had a quiet first half to the season, but the Manchester United winger is now growing in confidence and believes the Reds can go all the way in the Champions League.

It could be argued that Sancho has been United’s been player since the turn of the year.

United We Stand editor Andy Mitten explained how the England international turned things around at Old Trafford following one of the biggest transfers in Premier League history.

Sancho finally looks like that player we signed from Borussia Dortmund and it’s probably down to feeling more settled now that he is a key member of the first team.

There is still a lot more to come from the youngster but his performances of late give us plenty of reasons to be optimistic about the future.

It is clear that Sancho’s confidence has grown when you read his comments about potentially winning the Champions League this season. The quotes are from Manchester United’s official website.

Sancho said: “I feel like we have a strong enough squad to win the Champions League, I really believe that. But we all have to work for each other and for us to even get close to the final we have to go game-by-game. It’s going to be a tough challenge, but I feel like with the players we have and the experience we have then it’s definitely doable. And for sure I will do my best.”

The Champions League is, without question, the hardest cup competition to win in world football. Nobody thought Chelsea would become champions a year ago and look how that ended.

However, this is a United team that has struggled all season long. We are already out of the FA Cup and crashed out of the League Cup early on. On top of that, we’ve gone from wanting to compete for the title to fighting for fourth place.