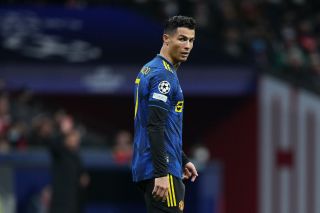 The 37-year-old, who amassed 400 million Instagram followers this week, took to social media to react to the devastating conflict in Ukraine.

Russia invaded Ukraine by land, sea and air in the early hours of Thursday morning which has spurred sports teams and governing bodies to take a stand.

Ronaldo has become the highest profiled United star to condemn the aggressive actions of Vladimir Putin and the Russian troops, after Ralf Rangnick’s comments on the ‘human disaster’ on Friday.

The Manchester United interim manager is in disbelief at the Ukraine conflict and believe UEFA were right to move the Champions League final from Saint Petersburg to Paris.

In a brief but powerful post via Instagram stories, Ronaldo uploaded a written message which was clearly directed at the conflict in Ukraine which has dominated the news: “We need to create a better world for our children. Praying for peace in our world.”

This statement from Ronaldo comes after United terminated their sponsorship with Russian airline company Aeroflot.

Everyone caught up in the middle of this conflict wants peace – bar a few bullies, throwing their weight around, using threatening tactics.