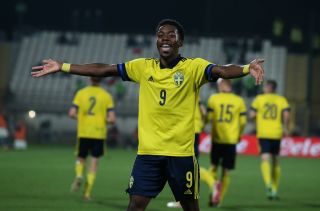 Anthony Elanga has already impressed on the biggest stage for Manchester United, so it’s only a matter of time before he receives his first call to play for Sweden’s senior side.

The 19-year-old academy graduate shared a moment with fellow Swede, Victor Lindelof, on Wednesday night after scoring the biggest goal of his career to date. They hugged after the full-time whistle and it felt like a turning point for the young forward.

United’s incredible away support made their voices clear in the Wanda Metropolitano. They sung Elanga’s new chant on repeat and I don’t think the youngster will be forgetting the night he became United’s youngest goalscorer in the knockout phase of the Champions League.

The performance against Atletico Madrid has hit the headlines in Sweden, but he has yet to make his debut for the senior international side. Elanga is a regular for Sweden’s U21s and has scored 7 goals in his last 7 games.

Swedish newspaper Aftonbladet claim it would be shock if Elanga was not selected after watching the La Liga champions struggle to get hold of him. There is now pressure on Janne Andersson to hand the youngster his first call-up.

Sweden will soon announce their squad for the World Cup qualifying play-offs to take place at the end of March. They ought to be mindful of a recent report from Fotboll Skanalen that suggested Cameroon are set to try and convince Elanga to play for them.